A recent viral post on Eat Local Grown suggested French school lunch put the American National School Lunch Program (NSLP) to shame. I don’t know enough about French school meals to comment, but I can tell you that the American meals pictured were from 2010-2012 and the school nutrition world has change dramatically. The French meals shown could have come from any one of hundreds of schools across America. Why I am so sure that NSLP meals are nutritious, delicious and increasingly locally grown? Because that’s exactly what I document every day on School Meals That Rock – and I have thousands of photos on Facebook, Pinterest and Twitter to prove it.

Thanks to major school nutrition movements including the National Farm to School Network, the numerous state/community farm to school coalitions, U.S. Department of Agriculture Farm to School resources and hundreds FoodCorps Service Members LOCAL SCHOOL LUNCH IS IN! And, we are talking real local, like the 1100 pounds of local sweet potatoes delivered by farmer Pete Jackson to Burke County Schools Farm to School Program. In his very rural Georgia county with one of the highest child poverty rates in the US, Director Donna Martin is growing the local economy by serving local, often organic foods including local grits ground the old-fashioned way. 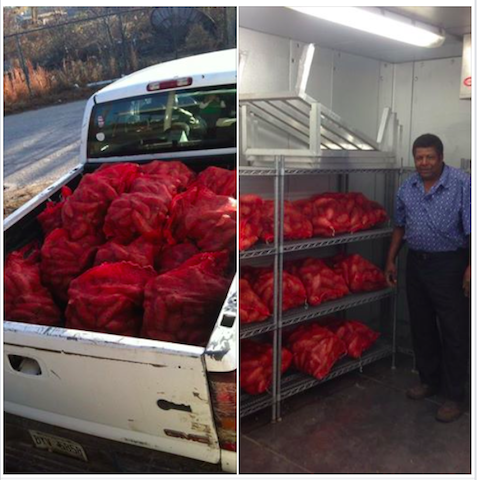 Up in Big Sky country, Montana Food Corps service member have helped to change school meals – and entire community food systems. The Ennis Farm to School initiative has created are now schools gardens, a greenhouse for winter greens and Montana Beef Stroganoff for Montana students. Kids are making and eating Beet and Carrot Patties, as well as the kale and kohlrabi grown on schools grounds. In Kalispell Public Schools director Jennifer Montague and her staff turned local squash into a Lentil-Squash Hummus snack.

Out in Eugene, Oregon, local is an everything thing on student trays. On November 7, 2014, Director Jennie Kolpak posted this photo for Bethel Nutrition Services: “Great lunch today at Malabon Elementary featuring an abundance of Oregon foods, including Vegetarian Chil with Truitt Family beans and Bob’s Red Mill bulgar, homemade Honey Cornbread, our Harvest of the Month (Oregon grown Comice Pears), local roasted Pumpkin Seeds, local milk and a variety of fresh veggies.” I would put this lovely lunch head-to-head with any fancy French school lunch photo. 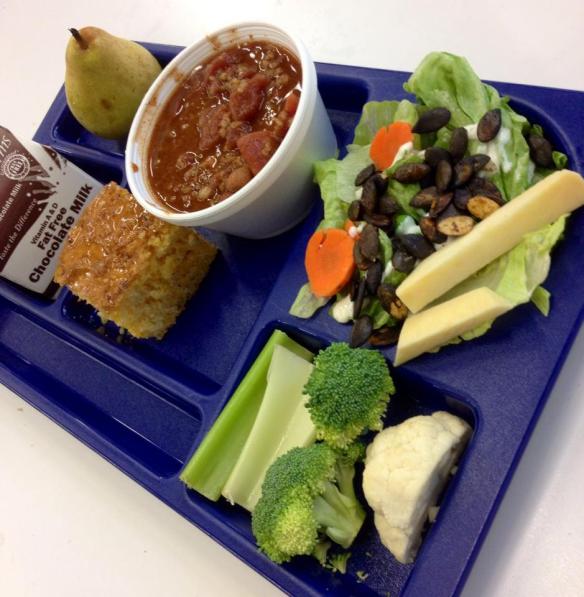 And this is just a tiny sample – tomorrow we’ll feature some of the programs that received funding in the latest round of USDA Farm to School grants. On Tuesday, Agriculture Secretary Tom Vilsack announced more than $5 million in grants for 82 projects spanning 42 states and the U.S. Virgin Islands. It’s all about local #RealSchoolFood across America. It’s time to stop bashing school meals and help support Farm to School in YOUR district!