Yet another superficial, completely unbalanced school lunch story hit the blogosphere last Friday on NPR’s The Salt. Unfortunately, author Maria Godoy failed to do any investigation, instead using a very non-random sample of teen photos to declare that “America’s school cafeterias are still turning out the culinary abominations.” Actually, Ms. Godoy, many school meals are foodies dreams come true – and here are several delicious examples that I used recently to celebrate October 2013 as Farm to School Month, October 14-18, 2013, as National School Lunch Week, and October 24, 2013, as Food Day. This trifecta of real food benefits everyone: The farmers and ranchers who grow food for local districts, school nutrition directors who know exactly where their food comes from, and – most of all – millions of students who enjoy fresh food right on their school trays.

The three pillars of a sustainable farm to school program are generally seen as Cafeteria, Classroom and Community. But there is fourth, equally important C – Champions! Successful farm to school programs are started, nurtured and harvested by champions at every step from the field to table. Here’s how three directors – three very cool school lunch dudes – from Maine to Montana are growing impressive farm to school numbers.

Thanks to Nutrition Services director Tyler Goodwin, students in the Wells-Ogunquit Community School District on the coast of southern Maine have a personal relationship produce on their lunch trays. It comes from the Spiller Farm, just two miles down the road and students help to pick it, clean it and prepare it. During September trips to the farm, hundreds of school kids picked 15 bushels (450 pounds) of green beans, 18 bushels (900 pounds) of red potatoes and 15 bushels (720 pounds) of apples (enough to supply the entire District for the next several months).

In October, Chef Tyler froze 10 bushels of carrots, also picked by student helpers. The final yield was 450 pounds of freshly picked, lightly steamed, very local frozen carrots for winter meals like veggie stir-fry, peas-n-carrots and candied carrots. The team is learning about and working to support centuries of farming heritage in Wells. According to Goodwin, fresh local produce makes a real difference in cafeterias too. “What I have noticed in all schools is healthier choices being made, kids are automatically selecting the required fruit or vegetable with lunch, and less waste than last year,” he reports.

Deep in the apple orchards of Central Michigan, Dan Gorman, Food Service Director in Montague/Whitehall Schools focused on some big farm to school numbers too – world record numbers in this case! On Oct. 24, he and the districts’ 4,000 students – plus at least 14,000 more in Muskegon County – regained the World Record for the “most people simultaneously eating an apple at one time.” Muskegon County held the world record (9,329) until last May when children in New Zealand schools upped it to 17,064 with the help of an apple company. Now, western Michigan is back in the lead with a very impressive 19,087 students, staff and local business folks crunching a Michigan apple at the same time. 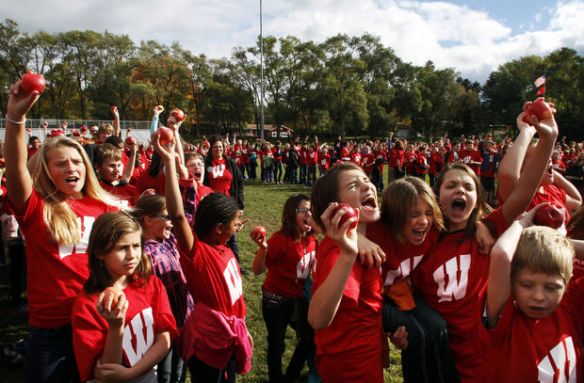 Promoting healthy snacking, supporting local agriculture and generating record-breaking excitement are just some of Dan’s everyday efforts to bring fresh, local food to kids. When he switched the district’s milk contract to a local dairy that raises its own cows and crops, the farm was able to hire four new workers. In the elementary cafeterias, monthly Harvest Days highlight Michigan fruits, vegetables and herbs. Students get to touch, smell and taste fresh items with their lunch, guided by an adult community member or high school mentor. As chair of the 1 in 21 Education Committee, Gorman is – as always – focused on a much bigger goal. “Going for a world record is as American as apple pie, but the more important goal is making Muskegon county the healthiest county in Michigan by 2021,” he says.

Now, about the kale chips for 8,000: It happened for the second time on October 2, 2013, to celebrate National Kale Day in Missoula County Public Schools, Montana. Last year, on a ‘dare’ from Jason Mandela of the PEAS (Program in Ecological Agriculture and Society) Farm, Food and Nutrition Supervisor Ed Christensen offered baked kale chips to every student in the district. While not shy about saying his kale chips are “the best,” Ed was impressed by how much the kids liked them. “It’s really pretty simple,” he says. “We use freshly picked kale, toss it with oil, sprinkle with a little salt, and bake slowly.” While olive oil adds nutty flavor and USDA commodity oil works fine, Christensen also likes to use Montana-grown safflower on his kale chips. 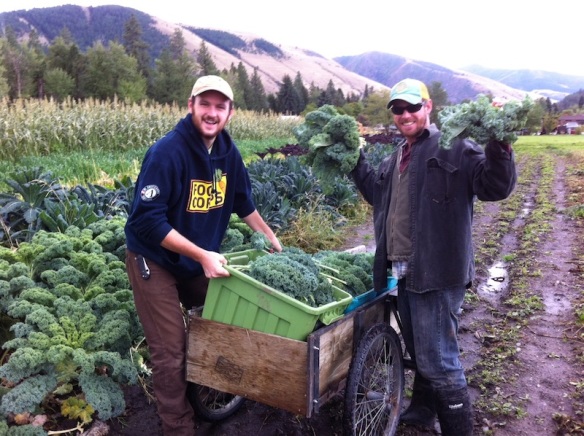 Picking kale for 8,000 in the PEAS Farm, Missoula, Montana

Kale is big on Christensen’s local veggie list because it’s so hardy, often the last thing harvested from the PEAS Farm. Chips are a great way to serve kale because they are like potato chips to kids. On a recent ‘smack down’ with a tasty raw kale salad, the crunchy chips won hands down. During this year’s Kale-abration, Ed saw savvy 3rd graders crushing the chips onto their pizza. About that pizza, the crust is 100 percent scratch, whole grain made with local Wheat Montana Prairie Gold flour and turkey pepperoni. Missoula schools are currently developing a scratch sauce to incorporate house-grown onions and herbs. Clearly Ed wants to do farm to school as many ways as possible – in a place with a growing season of less than four months!!

Being a school nutrition director is a tough enough job without adding inaccurate, inflammatory news stories. Despite the demands, thousands of directors across the U.S. have stepped up to the plate – or lunch tray – to do what Tyler, Dan and Ed do in their districts. Why? So students can have the freshest, best tasting, most nutritious meals possible and be fit, well-nourished and ready to succeed.

Kale chips for lunch with whole grain pizza and pears.

3 thoughts on “Kale Chips for 8,000 and Other Real School Food Stories”